What is serverless computing, and what are its implications for business?

Server management is one of the most demanding aspects of app development, but serverless computing is expected to change that for the better. Made possible through cloud technology, serverless computing promises to make app creation and maintenance simpler, cheaper, and much more efficient for small businesses and developers.

What is serverless computing?

If you’re using an app, the parts you can see and interact with — called the interface— are known as the front end. The part you can’t see is the backend or server. A server manages the app’s functionalities, security, storage, and how the application interacts with other apps.

Traditionally, developers — also called devs — had to have their own server hardware if they wanted to launch and run an app. They also needed to write the backend software that accesses the information stored in the server. What’s more, managing the backend, including steps like provisioning, patching, and scaling, was part of devs’ responsibilities as well.

Serverless computing simplifies app development by outsourcing all aspects of the backend to providers like Amazon Web Services (AWS) and Microsoft Azure. All developers have to do is write and upload their code onto cloud-based servers and maintain the front end. The provider handles the rest, including the hardware, server software, storage, hosting, authentication, and database management.

“Serverless” is associated with several types of cloud computing services (CCS), but it’s most frequently understood as another term for Function-as-a-Service (FaaS). Unlike other types of CCS where devs have to construct their code according to the cloud provider’s requirements, FaaS allows developers to break down the server into individual functions. Each function responds to an event in the app, such as user input, and performs a single action.

Another notable difference between FaaS and other types of CCS has to do with pricing. While other CCS, such as Backend-as-a-Service (BaaS), typically charge a fixed fee or according to storage space, FaaS charges developers for the times that their app’s functions are called.

How will serverless computing benefit businesses?

Serverless computing is relatively new, but experts consider it a very promising development. Its benefits to businesses include: 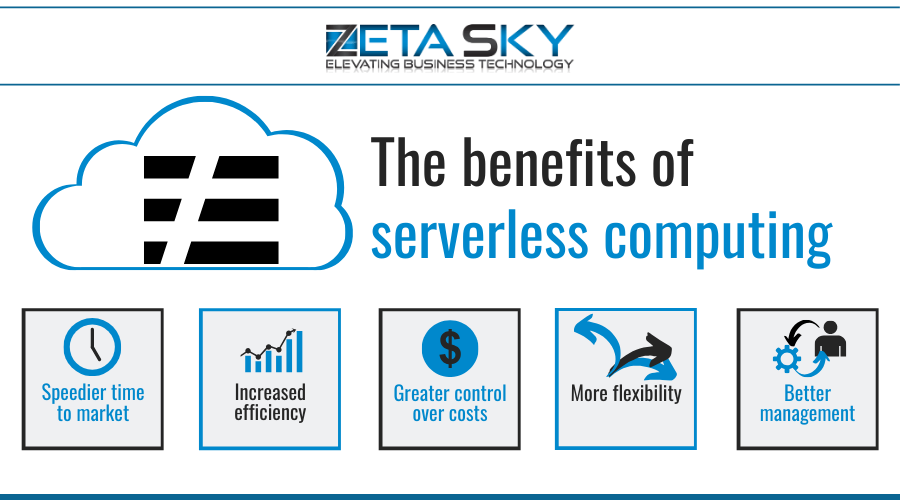 Delivering an app to the market can be an extremely lengthy process. Besides conceptualizing, designing, and actually developing your product, you’ll also have to consider the infrastructure needed to launch the finished app and keep it running. Serverless computing effectively cuts this process in half by leaving the provider to handle the server-side of your application.

Serverless computing enhances the efficiency of app development in several ways. For one, it lets you pay only for the time you actually use. Back in the day, you had to purchase a server, which had to be kept on all the time, even when it wasn’t receiving requests. If you’re running a small app that doesn’t get a lot of requests per day, then you’re essentially wasting time and money. You don’t have to worry about this with a serverless setup.

Furthermore, certain segments of your app, such as authentication and payment processing, need to be repeated several times during development. By breaking your app down into several components, serverless computing allows your developers to reuse repetitive components instead of rebuilding them from scratch. This helps you save time and money during production.

Serverless computing’s pricing scheme doesn’t mean you’ll always cut costs. If your app is small and doesn’t get a lot of requests, then you may save money. But if you have an app that gets millions of requests every day, then you may not get substantial savings.

The main benefit offered by serverless’s pricing, however, is that instead of paying for something you did not use, you pay for resources that actually produced outcomes for your business.

As your business grows, you may see the need for your app to target new audiences or incorporate new features. Because serverless leaves the backend to your provider, you can modify your app to match your new goals with little cause for worry.

Breaking your app down into smaller services gives you a better view of how it works and the changes it went through from step one. It is also much easier to test and fix should you detect anything wrong with your app.

Your potential and existing customers use apps every day. Serverless computing gives you the power and flexibility to create apps that will engage them, improve their lives and experiences, and keep your brand within easy recall when they need to make purchasing decisions.

Are you completely fed up with chronic computer problems and escalating IT costs? Do you worry that your backups and IT security are lacking? Do you have a sneaking suspicion that your current IT guy doesn’t have a handle on things? Our free IT optimization plan will reveal gaps and oversights in your computer network and show you how to eliminate all your IT problems and never pay for unnecessary IT expenses again.

Complete the form below to get started. We will contact you to discuss next steps to getting your free IT Optimization Plan