Cybersecurity is serious business for any organization. In a compilation report, cybersecurity experts revealed these alarming statistics:

So no matter how sophisticated cybersecurity has become, there are still must-have tools and services you need to keep your systems protected. Think of the following as your essential first line of defense; leave one out at your own expense.

Think of a firewall as the basic foundation of your cybersecurity arsenal. It’s a core security tool that blocks unauthorized access to your system from an untrusted external network, such as the internet. A firewall monitors your network’s internal traffic as well as screens all external attempts to connect to your network.

But as hackers become more sophisticated, they are able to devise new tricks to fool firewalls into allowing them access into your system. But no matter how malware evolves, a firewall is able to block a majority of attacks from less sophisticated or older kinds of malware. So a firewall is still a must-have.

Antivirus software alerts you for malware attacks, scans your email for malicious attachments and links, and quarantines or removes potential threats. Because malware is ever-changing, it’s important that your antivirus software is always up-to-date.

There is a wide range of antivirus software available in the market, so make sure you look for one that fits your business requirements.

Others may refer to PKI as the “https” or the padlock they see on the left side of the browser address bar. However, PKI services also include:

Because criminals are always ahead of the game, cybersecurity has shifted from preventing attacks to identifying and eliminating attacks immediately, to minimize damage. Early detection and response is crucial, because it’s more difficult to fight off an attack already in full swing, and damage will be greater.

Unlike a vulnerability scan, a penetration test involves security experts actually hacking into your system using the same techniques criminals use. This test reveals the full extent of your system’s vulnerabilities, and lets you see which data is exposed to hackers. Testers can now recommend the necessary improvements to ensure your network is better protected.

A 2018 data breach report stated that 28% of the breaches involved internal staff, 17% of breaches were due to errors, and another 17% due to social attacks. Outsiders may be beyond your control, but breaches from inside your organization can be prevented. 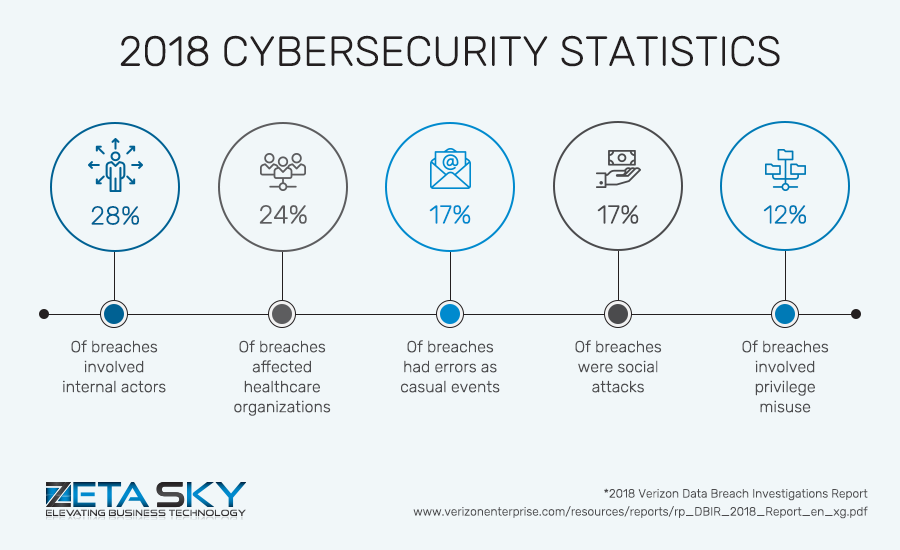 Train your staff on the current best practices for cybersecurity. Changes in cybersecurity happen often and swiftly, so make sure to conduct regular training sessions to keep everyone up-to-date. Things to focus on include:

An educated staff means everyone, not just your IT team, can contribute to keeping your systems safe.

Entrust your cybersecurity to Zeta Sky

Whether you have an internal IT team or not, you can’t go wrong partnering with a managed IT services provider (MSP) like Zeta Sky for your cybersecurity. Our experts will set up firewalls, intrusion prevention systems, and virtual private networks (VPNs). We’ll also monitor your system 24/7 with our specialized cybersecurity tools.

Aside from cybersecurity, Zeta Sky also offers cloud solutions, IT consulting, and more. We make sure your IT infrastructure is always optimized for your unique needs. Want to take your business sky high? Get in touch with us today.